You’d have to be living completely off the grid to not have heard of the IPCC’s Six Assessment Report (AR6), the first installment of which (Working Group I - Climate Science) was released in August 2021. The Impacts and Mitigation sections of AR6 won’t appear until 2022. While it’s understandable that the science would come first, it actually creates a problem for interpreting the climate risk implications of the >3,000 page Working Group I report.

This Climate Web-based Climate Site does not attempt to summarize the Working Group I report, but it does point you to some of the most insightful resources the Climatographers have seen for interpreting the report. You can find many more resources, including key ideas and graphics we’ve extracted from the report, integrated into the Climate Web.

General Reviews and Commentary re AR6

A number of important topics have been raised in connection with AR6. We’ve pulled together a short description of the topic, and then point you to materials to dig deeper should you wish to do so.

The results of AR6 are not based on running “a” climate change model. Instead, collections (ensembles) of models are run in the hopes of coming up with a better result than any individual model. The results of the model ensemble are often averaged to come up with what is then characterized as the “most likely” outcome. The problem is that there is no particular reason to assume that the average of many models will more accurately forecast future climate outcomes than an individual model that happens to perform better. And it’s results could be quite different than the average.

Here’s an example of the precipitation forecasts associated with an ensemble of models (not the AR6 models). As you can see, there is a great deal of variation across the different models. Calculating the average precipitation associated with all of these forecasts could, and often is, used as the “most likely” forecast. But who’s to say that the (blue) forecast of 45 inches in 2040 won’t turn out to be the best one? 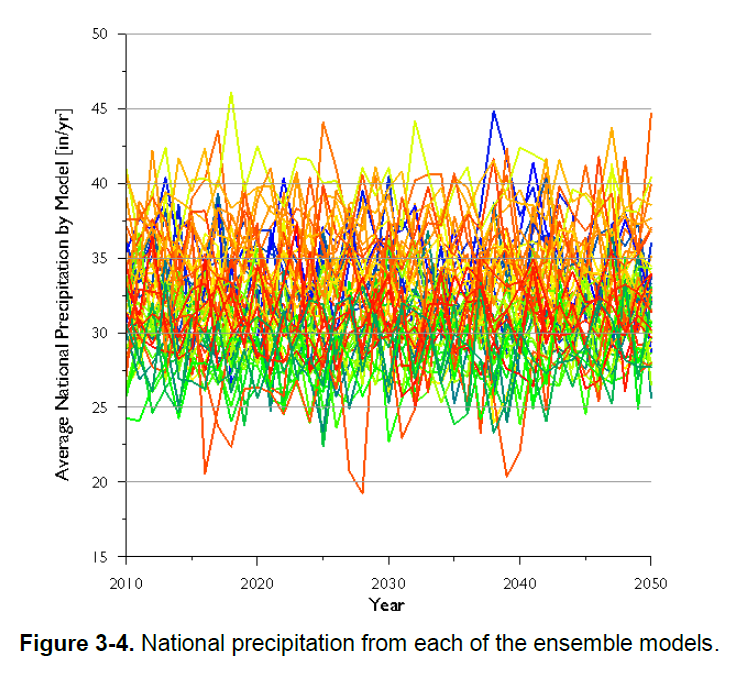 This issue, which has major implications for interpreting some of the conclusions of AR6, is discussed in this blog in response to the release of AR6.

There has been a lot of discussion of the fact that some climate models have been suggesting considerably higher increases in average global temperature that the rest of them. In fact, modelers themselves are uncomfortable with the forecasts associated with these models.

One of the advances being discussed in the context of AR6 is “attribution science.” Attribution science, which generally speaking compares the relative probability of an event with and without climate change in order to determine the relative role of climate change in causing the event, is becoming routine for major events. But it’s worth understanding that there are some tricky topics associated with “attribution science,” and the idea can be misinterpreted. We’ve pulled together materials that allow you to dig into this topic for yourself, using the recent heatwave in the Pacific Northwest as an example.

Carbon budgets are a useful way to think about how much time is left to avoid a given temperature outcome. Estimated carbon budgets in AR6 have changed, albeit not in a huge way. But pay particular attention to the budgets associated with a high probability of being able to achieve a 1.5o C or 2o C target.

There has been a lot of discussion over the years regarding the effectiveness (or not) of the IPCC when it comes to communicating climate risk. A few relevant resources (not necessarily specific to AR6) are included here:

The Climatographers will continue to add to this page. Note that it represents just a fraction of the relevant materials in the Climate Web. This page has actually been extracted directly from the Climate Web in order to make its content easier to access. You can learn more about the Climate Web, the closest thing to a collective climate change intelligence, through the links to the right of this page.

(and we’ll send you a coupon for 50% off a Premium Roadmap!)